Station Goals are special long-term objectives for the crew to pursue, which result in very special and powerful machines.

The Station Goal for each round is random, and communicated in the Blue Alert report at every communications console.

To complete this station goal you'll need to build a functional Bluespace Artillery!

The BSA builds itself slightly off-center from where the machine frames are. In this example, the bore is facing right. If you place the bore 2 tiles away from a window, it will stick out the window and won't depressurize the room when it fires!

Building the Bluespace Artillery will let you fire it at will! To do so it'll need a lot of power, drawn from the room's APC. The target is chosen with the console, which can aim at any GPS signal. Firing the Artillery will then obliterate the target and anything around it. The BSA is not limited by Z-Levels, and can be used towards the Lavaland or even Centcomm, if you manage to get a GPS in there.

Remember to not stay in front of the artillery when it fires, unless you enjoy being vaporized!

To complete this station goal you'll need to build and stock a DNA Vault!

When a DNA Vault is complete, everyone who uses it receives a choice between two of these. Picking one will apply that upgrade permanently. This has no cost and can be done on anyone who visits the Vault. 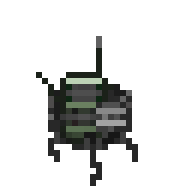 To complete this station goal you'll need to place Meteor Shield Satellites in space outside the station!

If you consider the station not being ravaged by meteors to be a benefit, then you will be very happy! Any future meteor showers (or meaty ore showers) will fail to collide with any parts of the station covered by your new best friends. It might also keep the NT Rep off your back for a little while, which is always a plus.

To complete this station goal you'll need to build a Bluespace Harvester, a powerhungry, experimental device mining other dimensions for resources.

The Harvester produces points at the cost of energy. These points can be spent on various, random rewards, ranging from a fancy hat to a chance at a guardian creator. Also, a highscore will be announced at roundend that secures you bragging rights for especially high points.