Congratulations on joining Nanotrasen! This guide will help you begin your career.

Space Station 13 (or SS13) is a multiplayer roleplaying game. In SS13, players take on the role of workers on a space station. Paradise Station is one of many SS13 servers with unique roles and gameplay possibilities.

Paradise Station is a medium roleplaying (or MRP) server. New players should look at the Controls. Additionally, If you are new to roleplay, please read the roleplay guide. Should you still have questions, ask them on the forums or in Discord.

The server rules help create an enjoyable atmosphere for all and punish users who interfere with the enjoyment of other players or adversely affect the community and server. Space Law largely dictates what you are and aren't allowed to do while playing.

We recommend that you read Space Law and Standard Operating Procedure, especially if you wish to play essential roles such as Security or Command.

atmosphere, they may be asked to change their behavior. 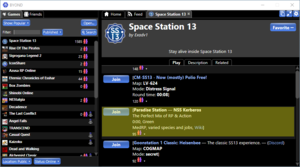 A screenshot of the BYOND client with the Paradise SS13 server highlighted in yellow.

If you have never played SS13, you must do the following:

You may join Paradise in one of the following ways:

You may also bookmark the server from the "Open Location" dialog for easy access.

If you successfully connected, congratulations! You're on the server! Before you charge at the game, We recommend that you set up a character next. 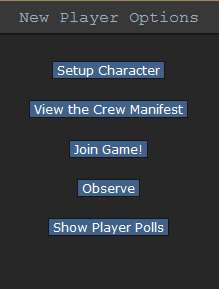 The joining and setup panel. 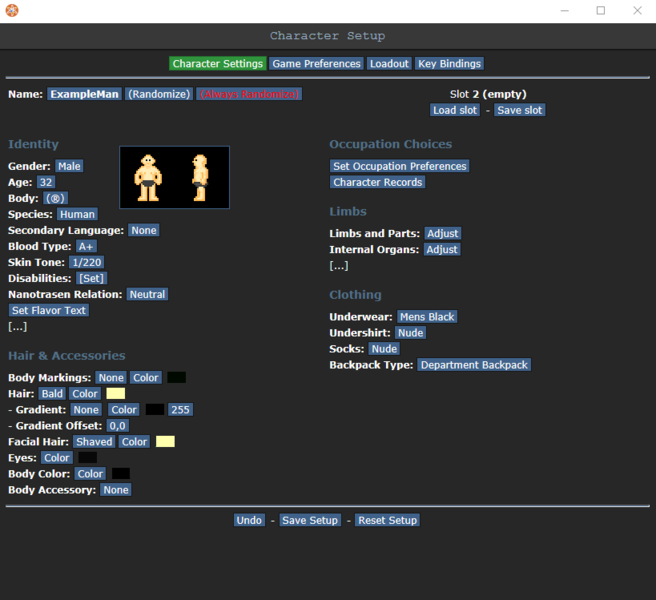 The Character Setup screen allows you to customize your character. This includes their name, species, and appearance. It is also where you choose which roles you'd prefer to play when playing, which is covered in Occupation Preferences below.

The Character Records screen allows you to set your character's medical and security records. These records can be read in-game by Medical Doctors or Security Officers, respectively.

This is an RP tool that you can use to help flesh out your character. However, since it appears in-game as an official record, it should be written as such. Try to write it as you would expect from a large company like Nanotrasen.

Do not put your records in your flavor text. Flavor text is meant to describe your physical experience.

There is also the "Employment Records," which can show your character's past occupation history.

In this section, you can choose to turn on and off preferences to be antagonists in the round. Turning these on does not guarantee you will be an antagonist; you're saying you want to be one. However, as a new player, you are not eligible to play as an antagonist until you have a few days on record.

The non-antagonist roles listed here are:

Clicking the "save slot" button will save your character to the database, your occupation preferences, and your antagonist choices. 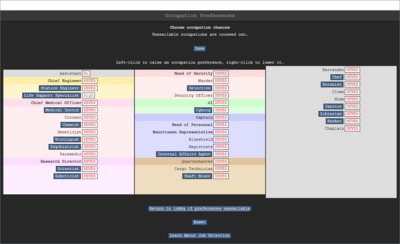 Your occupation is your most important choice on the server. It affects your station access, rank, authority, equipment, and purpose in life. The roles available to you are listed in the Occupation Preferences.

Except for Assistant, all job preferences have four levels: NEVER, Low, Medium, and High. These change how likely the server will assign you that job when it compares your preferences to other players. You may only mark one job High, but there are no limits otherwise.

Because of the diversity and range of jobs available, there are many ways to play the game. However, many jobs require a good knowledge of the game mechanics, the layout of the station, and how to use in-game tools and machinery. Because of this, the following jobs are recommended for new players:

If you're interested in other jobs, browse the Job guides. Avoid any security, engineering, and command positions until you get the hang of the game. This is especially true of the Head of Security, Head of Personnel, Captain and Security Officer positions. (Jumping into a position you're not prepared to do is a guaranteed way of making people angry at you and possibly earning a job ban.)

Congratulations! You've made it this far. You now have a character with a job, and I am sure you're ready to jump into your new role! Hold your horses because we have a bit more talking to do.

Each round begins with a short period where people can chat and declare themselves ready for the round. This is where your job preferences come in!

However, more often than not, you will join halfway through a round. By clicking Join Game! you can see a list of jobs not already taken. When you spawn onto the map, you will start in the Arrivals Shuttle and will be introduced by the Arrivals Announcement Computer or the AI. From there, you'll either head to your workplace and start or explore a bit first. There is a page on the map if you want a map of the station. You can also click View the Crew Manifest to see who is onboard the station before you join the game.

The user interface can look complicated at first, but once everything is explained, you'll feel better about it. The table below presents the elements you see in the example image. 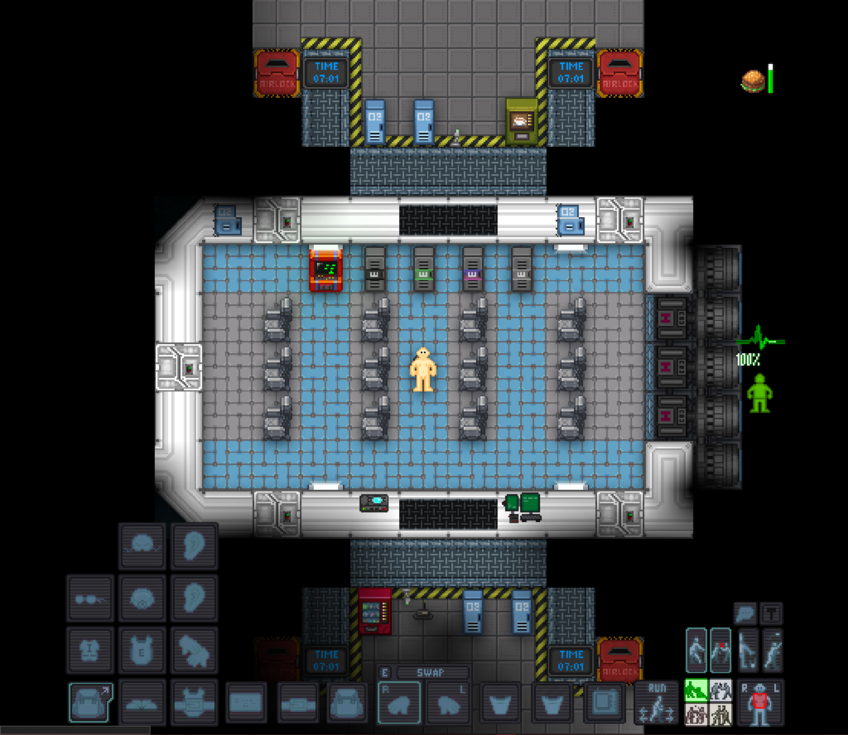 We recommend checking out the Controls page, as it contains lots of helpful information on controlling your player character and other critically important things to know!

The controls for SS13 change a lot depending on the server you play on. Here at Paradise Station, our controls have been moved to keybindings that you can easily change in Character Setup before a round starts. While the game can be highly complex regarding everything you can do or interact with, don't be discouraged! We have some basic mouse-related controls outlined in the table below and an image of the default keybindings on the right.

With the mouse, you can perform the following actions:

Headsets are little devices issued to every crew member upon arrival at the station. They allow crew members to communicate on specific frequencies. Wall-mounted intercoms are also usable. To use them, you must prefix your message with the correct channel. Let's go over the prefixes below. Additionally, each one can be swapped to "Hot-Mic" mode and will transmit any nearby communications with prefixes.

There are two ways to communicate with other players directly rather than in character. The "OOC" or "Out Of Character" chat is for talking with others before and after the current round and can be used with the "O" key. During the round, OOC is disabled, and note that you will be using your BYOND username instead of speaking as your character. The "LOOC" or "Local Out Of Character" chat is similar to OOC but is used during the game. It only broadcasts your typed message to the local area and can be used if, for example, someone is having trouble with controls; LOOC can be done with the "L" key.

Many abbreviations are used on the server. For a complete listing of commonly used acronyms, see Glossary.

Read up on the other guides; plenty are out there! Or, head to the discord and chat with the admins and mentors there; they are always happy to teach you a little extra.

What To Do Now

Things not to do

While this should already be pretty obvious, do not do the following:

Things you should do

Most importantly, have fun! After all, That's what this is all about!

Welcome aboard the NSS Cyberiad. Have an efficient and productive day!

Should you find yourself needing more advice on how to play or whether you're breaking a specific rule, you can also use the Mentor Help and Admin Help functions to do so while playing. Generally, there will be at least one person online who can answer any queries you may have, so don't be afraid to do so. To access this, either press F1 and click Mentor or Admin Help, or click on the tab labeled Admin and click Admin Help, then choose your option and type your message. When your message has been replied to, you'll hear a 'bwoink' sound, and their message will appear in the chatbox, with a link for you to click so you may reply if necessary.

You can use the two options at any time for any questions; however, specific things may be more suitable to be directed toward mentors and admins.

Mentor Help would usually be used in a situation where you'd like to know more about something that would otherwise not be able to be discussed in OOC chat without breaking the IC in OOC rule. For instance, if you had just spawned in as an engineer and wanted to know more about construction, you could use Mentor Help to ask a mentor for advice. In this case, they would either answer your question, if it's specific, or direct you over to the wiki page so you can learn more.

Admin Help would generally be the thing to use if you spot someone breaking a rule or need confirmation from an Admin about something you're about to do to ensure you're not breaking any rules. An example would be if you were an antagonist and wanted to cause chaos on the station by releasing the engine or detonating a devastating bomb. It's recommended that you let them know before doing something like that so that they can tell you not to if they don't feel like it is a good idea.

So, now you know that you can always rely on the Admins and Mentors to help you whenever you're in doubt about something. After all, that is why they're here, to make your time playing on the server as enjoyable as possible!