Difference between revisions of "Guide to Testing Your Pull Request"

This article or section is a Work in Progress.
Assigned to:Sirryan2002
Please discuss changes with assigned users. If no one is assigned, or if the user is inactive, feel free to edit.

Code by nature works as coded and not always as intended, while you know that your code compiles and passes tests on your Pull Request you may not know if it breaks in edge cases or works fully in-game. In order to ensure your changes actually work, you will need to know how to Test Your Code. As part of this process, you will learn how to use various in-game debugging tools to fully utilize your changes in a test server, analyze variables at run-time, test for edge cases, and stress test features. This guide will also explain more advanced concepts and testing such as advanced proc calls, garbage collection testing, and breakpoints.

In order to speed this up, especially for experienced devs, know what you're looking for and write down a list (mental lists work as well) of what you want to test. If you're only changing an attribute, list the interactions that attribute has with other functions so you remember to test each one. If you're adding a new atom, write down possible interactions that atom may have with other relevant atoms (think parent objects, tools, materials, machinery such as autholathes, antagonists).

Make your tests atomic. i.e. don't try and test everything at once, pick one specific thing (or closely related groups of things) to test on. If your item affects other items you want to test, consider restarting and using a clean round or properly cleaning up the test area.

While mastery of these tools is not required, basic familiarity with them will be paramount to proper testing.

The Game Panel is a small menu that allows the user to set the game mode for the round or spawn in atoms (turfs, objects, mobs, etc). In order to access the Game Panel, you will need to click the Game Panel verb under the admin tab. 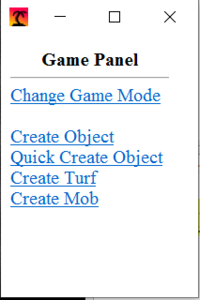 The Game panel has 5 buttons:


The most important buttons are the 4 create buttons. By clicking on them you can open up the game panel create menu. For beginners, there are 5 important aspects of the game panel that you will need to know (the other inputs and buttons are very sparsely used, and likely not needed in your case). 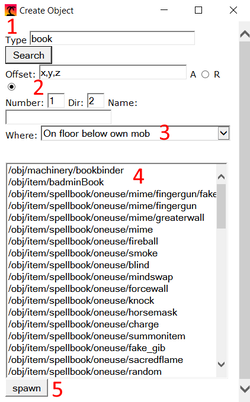 The runtime viewer interface is a menu that displays every runtime that occurred during the current round. It is available by clicking the View Runtimes verb under the debub tab. 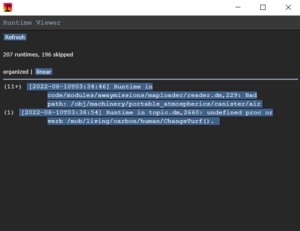 The runtime viewer displays a list of almost every runtime in a round, a few unimportant or repeated runtimes are skipped. Essentially, runtimes are errors that occur when the server is running (as compared to a build error that occurs when attempting to compile). Clicking on a runtime will open up more details about it. 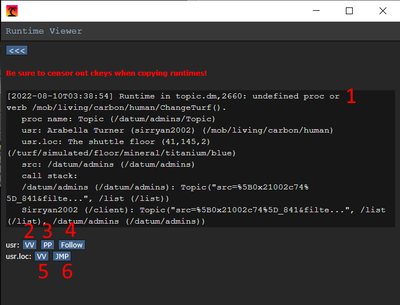 Does it Even Work?

The first step in testing is to see if your change spawns in/displays at all. This part of testing focuses solely on finding out when and where your changes break, not particularly how or why it breaks.

If your change is creation/removal of an atom. open up the Game Panel and see if the atom has been added/removed as a typepath, if it's not, make sure your code was actually compiled and check to either see if you A) actually defined a new typepath properly and have the file ticked in the DME file and B) you removed ALL instances where the type path is used (even proc definitions!). If your change is a map change, please see the Guide to Mapping.

Use the game panel to spawn your atom with the given type path:

Note: An Atom in DM refers to all elements of type "area", "turf", "object", or "mob." Each has different behaviors for spawning, deletion, and interaction so keep that in mind. Additionally, there will not be much reference/relevance in this section to "Area" type atoms..

Does it Work the Way You Want it to?

Test the attributes of your atom:

You may not have touched a certain section of code, but it's entirely possible that you broke it with a nearby change, check to make sure it still works the way it's supposed to (or even at all). For example, if you modified a variable inside a book object, can the barcode scanner still scan it into the library system? If you changed the way xenomorphs handle combat, will disablers, lasers, batons, etc still work the same way or function at all?

Be Concise and Specific

Your goal here is to break your change in every (relevant) way possible, use your change in every way you intended it to be used and then use it every way it wasn't intended to be used. However, this isn't to say you need to test every use case or test every single object that may be affected. As a contributor, you have limited time in your day to spend on coding, don't waste all of it trying out every different testing scenario. Here are a few tips to be efficient:

Why Doesn't it Work?

The previous question of "does it work" often answers itself just by spooling up a test environment, however, figuring out why things break is a much more difficult and in-depth task. This section will avoid getting into technical discussion and will instead explore conceptually how to begin understanding why your change is not working.

Does it Produce Errors?

Changes that clearly break often come saddled with a few runtimes which are errors that occur while the server is actively running. In your preferences tab, you can click the Toggle Debug Log Messages verb to toggle on debug message which will allow you to see runtimes pop up exactly when they happen in the chat box. You will need to do this every round unless you have a database properly set up. Additionally, you can view all runtimes in a round by clicking the view runtimes verb in the debug tab to open up the runtime viewer.

This will allow you to identify the errors your changes are producing and possibly even identify where, how, and what is breaking in your code. Do note that this will often not reveal larger issues with your code that is sourced from bad design decisions or unintentional effects.

Sometimes the values are incorrect for