Atmospherics. To the ignorant, a mystical art indistinguishable from actual magic. To the (hopefully) educated Atmospheric Technicians of the station, a glorified network of conveyors for moving gases about. Either way, Atmospherics holds great and terrifying power in the hands of the initiated.

Pipes and Gases, the Basics of Atmos

If you aren't working with pipes and gases, you aren't doing atmospherics.

Where to Get Pipes

Meet your two new friends. One never returns the money they borrow, you aren't really sure why you hang out with them. The other one is kind of awesome.

Pipe Dispenser - A static machine that will print out pipes for you. You will never use this.

Rapid Pipe Dispenser - A hand held tool that can print, place and recycle pipes for you. Fits in your backpack and doesn't need ammo.

Beneath are all the things your dispenser can make. Learn them well, for they are the fabric from which atmos is woven.

The main goal of atmospherics is to manipulate these in a way that benefits the station. Each type of gas has different properties that can help or hinder. Your skill in manipulating these will determine the success of your atmospheric machinations.

While pipes themselves will always work if undamaged, atmospheric devices all have certain prerequisites that must be met for them to operate.

In addition, there are other pieces of infrastructure that can/must be used when working with specific atmospheric devices.

Mandatory for the use of non-passive vents and scrubbers. Allows a wide range of control over a blueprinted rooms current gas contents. Where exactly the Air Alarm is in the room does not matter. As long as the room is blueprinted and powered it will function. Cannot be placed in areas that are not blueprinted.

To learn more about Air Alarms and how to use them, click here: Air Alarm

Atmosia Proper - The Beating Heart of the Station 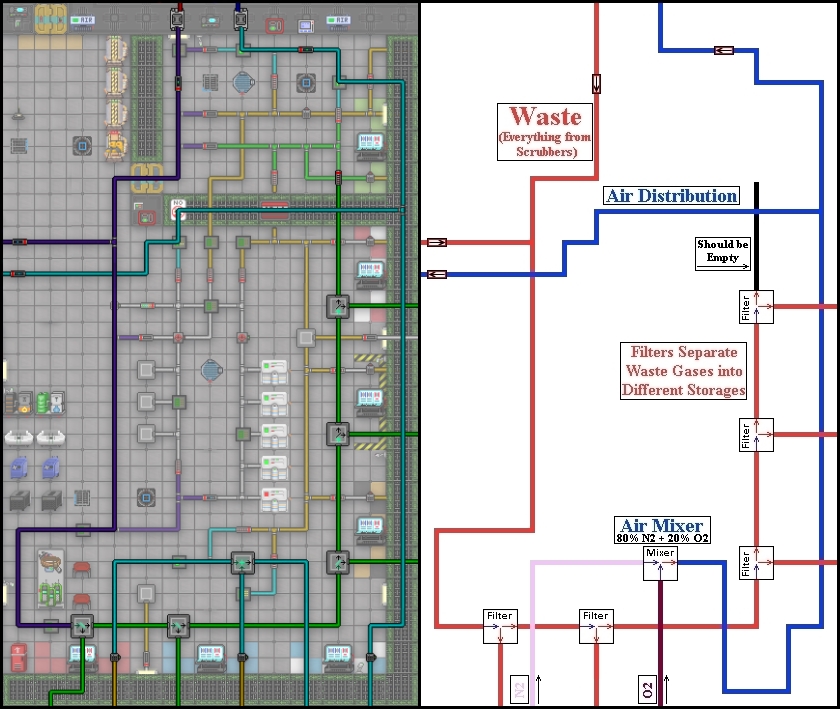 In Atmosia, you will see many different colored pipes. These colors are labels, marking out different systems within atmosia.

The magical formula for improving your burn mixes.... and explaining why your coolant pipes have such a low pressure.

P - Pressure in kilopascals or kPa
V - Volume in liters
n - is the amount of substance of gas (also known as number of moles)
R - is a constant or 8.31
T - Temperature in Kelvin


Cooling a gas will make it take up less space (volume) for each unit (mole) of said gas. This effect also results in a gas at a lower temperature having a lower pressure. Heating a gas will have the opposite effect, resulting in a larger volume and higher pressure per mole.

Conversion to and from Kelvin

While most things will yield temperature in both Kelvin and Celsius, here is the conversion formula just in case.

(Temperature in Kelvin minus 273.15 is that same temperature, but in Celsius)