The Tesla Engine is a modern, efficient and safer alternative to the infamous Singularity Engine.

The energy ball, aka Tesla, emits a series of arcs which is then harvested by tesla coils.

For the safest setup, a Tesla engine requires three layers of containment to ensure that the tesla ball stays safely within a confined space. On the innermost layer, a required 3x3 energy containment field. Additionally, you will need grounding rods to absorb the arcs of lightning so that they don't wreck other machinery/structure. On the middle layer is a large solid container constructed out of reinforced walls to keep out intruders/meteors as well as house all the equipment needed to run the engine. The outermost layer(optional) is a soft barrier constructed out of lattices and grilles to sop up meteors.

An energy field is the only thing a tesla cannot travel through. If this fails, the tesla will breach containment. In other words, don't fuck up this step. You will need: 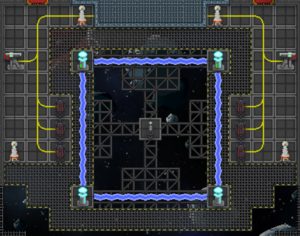 -The Grounding Rods can be acquired from either R&D or Cargo.

-The Field Generators can either be found in the Secure Storage, or ordered from Cargo.

-The Emitters can also be found in the Secure Storage, ordered from Cargo or printed from R&D.

Begin by placing platings down in an open space, this is where your Singularity generator will go. Follow this by building three tiles of lattice out in each direction and placing playing at the end of each of these. Continue placing lattice to make a box out of each of these. Make plating on each corner.

Now that you have done this, place a field generator on each of the external plating. Make sure that they are properly secured. Once secured, place 4 tiles of lattice out in any direction from the corner field generators. Only the corners need emitters(and they only need one emitter). At the end of these lattices place some plating(this is where the emitters will go soon). 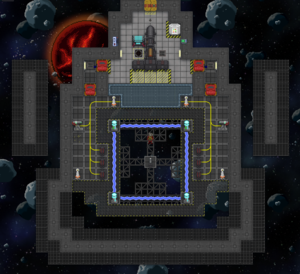 Whenever making an engine that is susceptible to being tampered with or fragile to high-speed space rocks you will likely need a barrier from space. This is optional, but highly recommended.

This is optional, but highly recommended.

Additionally, a PA control console will need to be constructed next to the PA with board from the cargo crate kit.

With the machines assembled, open the console and see if it detects all parts. Press "Run scan" if you have to. If that wont work, see to it that all parts are in the right place and try again.

In order to utilize the Tesla to make power, you will need the following:

-The Enegry Ball Generator must be ordered from Cargo.

-The Tesla Coils can be ordered from cargo or R&D.

-The SMES units can be ordered from R&D.

Place the Energy Ball Generator in the middle of the containment, in range of the Particle Accelerator.

Place the Tesla Coils right next to the containment, closer to it than the grounding rods. Once you do that, you should wrench them down onto a wire node(direction doesn't matter). The more Tesla Coils you place, the greater the power you will accumulate. The Tesla Coils will automatically generate power when shocked by the Tesla.

You will need at least two SMES units to manage the power from your engine and to power your containment. See here for a guide on SMES construction. Both of the SMES units should be hooked directly into the engine wire network(which is separate from the station). However the output of one SMES(SMES 1) will feed directly back into the engines wire network and the other SMES(SMES 2) will output into the stations power net.

Turning on the engine

Before doing anything else, put on Insulated Gloves and ensure you don't have any vital organs that rely on electricity. The tesla will shock everything nearby (PA, Emitter, and Containment Field not-included) if the grounding rods aren't properly set.

Once everything has been constructed. You will need to fill SMES 1 with at least 50k watts before attempting to turn the engine on(containment may fail otherwise). This can be done by using a P.A.C.M.A.N generator on the engine network for a bit of time.

While SMES 1 is charging you will need to drag a Tesla Generator node to the center of containment and leave it there.

Once SMES 1 has reached at least 50k watts stored, set its charge to off and set its output to max. Go to each emitter and turn them on, you will also need to turn on each field generator until a blue containment field

Once containment is up, you will need to walk over to the Particle Accelerator and turn it on to power level 2. You can now leave the engine and it should run without issue.

Turning off the Engine

Occasionally, bad stuff happens. Well, most of the time, bad stuff happens. Sometimes it is necessary to deactivate the engine as safely as possible because nobody can maintain it. Other times meteor showers and bombs endanger your containment machinery. Whatever the crisis, if you have followed the steps above it should be safe to simply turn the accelerator off. The engine will continue to generate power as the tesla starves and shrinks, so containment SHOULDN'T fail until the tesla is sufficiently small enough that it cannot cause massive damage. However, the baby tesla will take a long time to die completely.

Sometimes it's a good idea to charge the SMES quickly (using the optional techniques above) and then turn off the engine safely until you need power again. This means that poor solo-engie can actually go do other stuff and leave engineering for a bit without inadvertently destroying the station.