So you want to be a doctor?

Well there's a few things you should know about working in the medical department first!

This guide will cover everything regarding basic medical procedures, for surgery or cloning see the Guide to Surgery or Guide to Cadavers

Tools of the Trade

There's a plethora of equipment available to any aspiring doctor, most of which can be found in the NanoMed dispenser.

A Breakdown of Basic Chemicals

Whilst working in the Medbay there is a wide variety of chemicals you might encounter. They can most reliably be found in medkits, NanoMed Plus vendors, and Chemistry's Smartfridges.

While this list doesn't cover nearly all the chemicals, it's a good primer on chems you'll frequently encounter and need. To see every chemical, check out the Guide to Chemistry.

Important: Corpses cannot metabolize chemicals. Use advanced healing kits, auto-menders, or medicine with effects that don't rely on being metabolized, such as Strange Reagent or Synthflesh.

Most damage will fall under four major categories: Suffocation, Toxin, Brute, and Burn. These will show up on the Health Analyzer and in low amounts are very easily treated. There are also treatment kits for each of these categories located within medical storage.

Important: Certain species have to be treated differently than others. Failure to do so can and will lead to their death. See Racial Differences for the special treatments.

Suffocation results from being in areas with low oxygen, low blood count, certain chemicals or severe damage to the heart/lungs.

This shows up as a GREEN number on the Health Analyzer and Crew Monitoring Console. The presence of radiation can be detected with a health analyzer, but a body scanner or geiger counter is necessary to ascertain the value.

Toxin damage can be easily identified by the person constantly taking damage or vomiting. It is caused by a damaged liver, ingesting narcotics or toxins, overdosing on certain medicines, getting the wrong blood type, having an infection - especially septic limbs/organs - or by radiation.

Brute damage can range from a scratch to physical trauma. It can lead to broken bones, internal bleeding, severe blood loss and organ damage, and thus is the most dangerous type of damage.

Burn damage can result from fire, electrocution, energy weapons, exposure to extreme temperatures, or certain chemicals, such as acids.

Some damage does not show up in any category, but will show that the person is injured when checked with a Health Analyzer

Slimes in Xenobiology, non-upgraded cloners, and Strange Reagent cause cellular damage. Stamina damage is most often caused by non-lethal weapons, such as disablers or beanbag slugs - this type of damage is not dangerous to the patient. Hallucinations can occur from a radiation field event, ingesting narcotics, having a genetic defect, or the abilities of certain antagonists.

There are three types of critical states. The first is shock; this occurs when the patient is at or below 0 health (having taken at least 100 points of damage). This causes stammering, fainting, and an inability to see correctly. This can be cured by healing enough damage to bring them back up to 25 health, or by using Saline-Glucose Solution.

The second state is cardiac failure, which has a chance of occurring when a patient's shock is left untreated too long. The patient will be unable to see well, unable to breathe, and they will fall down often. When a patient's heart is failing, their condition will progressively worsen until they begin to undergo cardiac arrest. Cardiac failure can be treated with Atropine, Epinephrine, or Heparin, and is extremely unlikely to go away by itself.

The third state, cardiac arrest, is extremely lethal. It will almost immediately cause the patient to drop to the ground and rapidly take brain and respiratory damage. If left untreated, cardiac failure results in very rapid death. Treating cardiac arrest requires a defibrillator (handheld or otherwise). 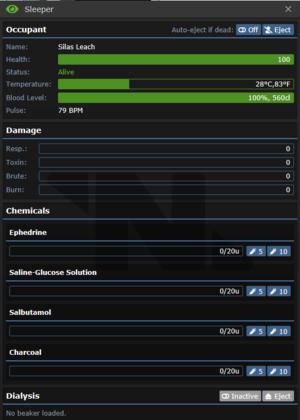 Sleepers are useful albeit slow machines. They can cure addictions and inject patients with specific chemicals. Cryotubes always heal faster than Sleepers. They are designed to be a slow but infinite source of stabilization for critically injured patients or treatment of minor injuries. For most cases, medicines provided by NanoMeds or Chemistry are a faster and more effective source of healing, and Sleepers have difficulty fixing anything outside of Brute, Burn, Toxic and Respiratory damage. To use a sleeper, drag and drop people onto it then click on it to open the control panel. If you get the error message "subject may not have anything in their hands", it means they are holding something in their hands: ask them to put it away or drop it.

By default, Sleepers have Ephedrine, Salbutamol, Charcoal and Saline-Glucose Solution. To see what these medicines do, refer to Guide to Chemistry. As a general rule of thumb, Ephedrine is not worth using, unless there is absolutely no other choice, as the addiction is crippling.

Sleepers can also heal addictions after a certain amount of time. The sleeper will alert doctors with a message audio cue once a patients addiction is cleared, this can take some time as well.

If they get upgraded, the capacity for injecting more of these chemicals increases from 20 units to a maximum of 80 units.

Dialysis is the clinical purification of blood, as a substitute for the normal function of the kidney. When someone has ingested or been shot up with a large amount of reagents, a sleeper can rapidly drain them of said reagents. Quite often, a purgative chemical is more effective - though not infinite.

To perform Dialysis, you will need:

The defibrillator is used to revive dead patients. Time is key. If a corpse is brought in, make it a priority to revive it as defibrillating them is most often the fastest way to fix them. Sometimes it's good to defibrillate a patient that isn't fully fixed in order to extend their defib timer.

Corpses can be revived for five minutes from their death. A necrotic heart cannot be defibrillated. Husked patients need to first be de-husked with the use of Synthflesh. The defibrillator can give the following messages upon usage:

With two located east of the Sleepers and one next to the cloner, it is a quick and efficient way to heal brute, burn and respiratory damage. Feel free to use it on every patient if Medbay is not busy but reserve it for more severe cases when there is a huge influx of patients.

If a patient is low on blood, you can do a blood transfusion. Mixing up the wrong blood types will cause toxin damage and can be fatal. There are four main blood groups along with a protein factor:

Some races require special treatment and failing to do so can lead to their death. This section is vital, make sure you read it closely.

Depending on the race of the patient in question, specific forms of treatment may prove to be ineffective or even adverse to the health of the patient. Here's a breakdown of all the do's and dont's when it comes to the various species you may encounter during a shift. As Humans, Unathi, Tajaran, Vulpkanin and Kidan are all the exact same in medical terms (and require no special knowledge for treatment) we'll be omitting them from this section of the guide.

A quick rundown on your colleagues' workplace and what they do there.