The Chemical Research portion of research and development involves experimenting with chemicals and how they react with eachother. Equipped with chemical dispensers and the means to construct grenades, science should attempt to experiment with various grenades in their test chamber or patch/pill mixtures. This can not only be used to learn about beneficial chemicals but also as an opportunity to produce helpful chemical contraptions for the station.

Your job is to experiment with chemicals. While many Scientists prefer to work with only Pyrotechnics, there is also the opportunity to create superior healing mixtures, fun concoctions, and better chemicals to improve Service or Security jobs. 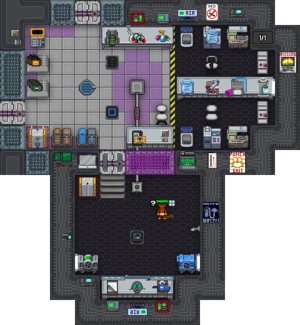 The chemical research lab consists of chem-dispensers, chem-masters, and chemical heaters. This is where you will mix, create, and analyze different chemicals and compounds. The lab is also equipped with a blast test chamber in order to test your grenades. It's very important you know exactly what you're mixing before you mix it because you only get one research lab. A designated test chamber is generally provided in the Research department for testing compounds.

Fire and foremost, scientists should grab a gas mask (for protection when mixing compounds) and set their Suit sensors to max for when they inevitably blow themselves up. Where to begin is up to the imagination and initiative of scientists, it may be beneficial to look through the Guide to Chemistry and see what each chemical does either when combined to make a visible effect or ingested by a monkey test subject to see the effects on it. Once a chemical is discovered that may be useful or interesting, scientists should see how these chemicals could be best utilized either through different types of grenade casings and Assemblies or in application through patches and pills.

Unless the compound requires approval from the Research Director, scientists should feel free to distribute these grenades where they may be most beneficial to the station. That being said, this role is about exploration and having fun, so players should not feel pressured to make compounds for the station. However, players should be cognizant of Research and Development and man it when necessary.

Since chemical researchers will be working with chemicals mostly, it's important for them to understand the machinery and tools available to them:

Chem-Dispenser - Allows user to dispense Base Chemicals and clear unwanted chemicals from containers, only one beaker at a time can be inserted.

Chem-Master - Allows user to insert a beaker, separate out chemicals, and then turn those chemicals into pills or patches.

Chemical Heater- Allows user to heat the reagents contained inside of an inserted beaker.

Using a combination of these machines will allow any scientists to produce what they want. However, there are a few chemicals that are not obtainable through chemistry and must instead be gathered from Botany, the Gateway, or even Space Ruins.

Beakers are container which hold a certain amount of units of any reagents. For better tracking and organization, scientists can use pens on beakers to add a label to it. Unless a scientist is in possession of science goggles, they will not be able to see the contents of the beaker directly and instead will have to insert them into one of the chemistry machines. The contents of beakers can either be warmed/heated by the chemical heater or by using an active welder/lighter on the beaker.

Across all beakers, reagents can be transferred from one container to a second container by holding the first container in-hand and then click on the other container. The amount of units transferred can be specified by right-clicking the beaker and clicking set transfer amount. When transferring container-to-container, how much of each specific reagent that is transferred cannot be set and instead a proportional (percentage of reagent's units compared to total units of reagents in container) amount of every reagent will be transferred. Finally, the reagents of a container can be splashed on a surface/object/person by using it with harm intent on said object.

There are also tools to help with precise chemical transfers between container or mobs:

Syringe - Has two modes, can either inject or draw. Can move up to 15u of chemicals in increments of 5u at once, very useful for injecting mobs with chemicals or drawing blood.

Dropper - Precise reagent mover, can transfer 1u, 2u, 3u, 4u, or 5u of reagents. By targeting the eyes, the dropper can be used to drip chemicals into mobs eyes

Pipette - Extremely precise reagent mover, can transfer any amount between .1u and 1u (up to the 10th place).By targeting the eyes, the dropper can be used to drip chemicals into mobs eyes.

While these are the only beakers available, any container such as water bottles, glasses, cans, bottles, etc can be used in the same interactions as beakers. Alternative containers generally come at the cost of having much lower unit capacities.

The main article for this section is Grenade

Grenades are assemblies that upon activation, will count down from a timer of either 3 or 5 seconds and upon detonating will mix the contents of two beakers stored within them. All grenades have four components: the type of grenade casing, the trigger, beaker 1, and beaker 2. The amount of chemicals that can be mixed in the grenade is entirely reliant upon the unit capacity of the beakers contained inside. Generally, using a generic grenade casing will accomplish a scientists goal in mixing chems, however, specific grenade assemblies and casing types will allow scientists to perform much more controlled and specific reactions.

The limit of chemicals in a grenade is 600, since one can mix two bluespace beakers (300u each). Any beaker can be used for grenades, except for buckets. Grenade timers can be changed between between 3 and 5 seconds by using a screwdriver on it. All grenades (except cryo grenades) will heat the mixture by a minor amount upon detonation.

The main article for this section is Assemblies

Assemblies are a combination of components that will activate upon receiving a signal or meeting a certain condition. This can come in the form of proximity sensors, health sensors, and even laser triggers. All assembly components can be printed via Autolathe. Grenade casings can be attached to these assemblies to create grenades that will activate once a certain condition is met.

Each of the assemblies can be deconstructed once disarmed by using a wrench on them.