This page needs to be reviewed/updated:
REASON: This page may contain inaccurate information regarding the USSP. Please refer to the USSP article for an accurate series of events regarding this splinter faction.

The Trans-Solar Federation (also known as "SolGov") is the largest originally Human government in the Galaxy. It is a military republic composed of various colonized systems within and around Sol proper. 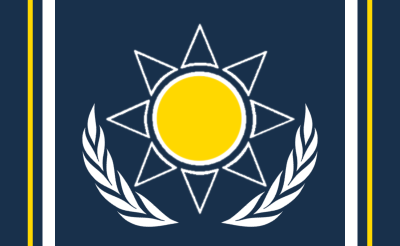 The federal flag of the Trans-Solar Federation.

After weathering a series of prolonged natural disasters and resulting resource wars that lasted from 2083-2093, the surviving nations on Earth federated to form the United Earth Confederacy—a precursor to the Trans-Solar Federation. In 2099, the Confederacy launched humanity's first extraterrestrial colonization program, known as the “Ark Program”, with Mars as its destination. In 2103, the UES Ark successfully touched down in the Holden Crater, and colonization efforts began. The confederacy was not meant to last however; internal conflict within the Confederacy played a hand in its dissolution, disrupting supply shipments and leaving the budding Martian colony in the dark. The power vacuum that was created in the wake of the Confederacy's collapse would go on to spur the disparate nations of Earth into a nuclear power struggle known as the third world war.

Following sixteen years of warfare, the Solar Federation finally emerged from the ashes of the now war-weary nations, and quickly resumed the Ark Program. Upon arrival of the first relief and resupply ship in 2128, it was quickly discovered that after the communications blackout, the Ark colony had exploded in population, size, and productivity. Using iron and carbon refined from the Martian soil they had built vast manufacturing and mining infrastructure, allowing the colony to become self-sufficient. Nanotrasen, having incorporated under the UEC just before the dissolution, already possessed the rights to a sizable amount of Mars’ planetary surface via lucrative mining, refining, and research contracts – a position they continue to hold to this day.

Spurred on by a population crisis in the Sol System, the recent discovery of Bluespace and advancements in faster-than-light transmission and thruster design, the Solar Federation was reformed into the Trans-Solar Federation (SolGov as we know it today) in the year 2199. Owing to the vast distances between stars, stations such as Naval Station Norfolk - which serves a double role as a refueling station for colonial vessels and a drydock facility for SolGov Navy ships - were constructed to further extend the reach of SolGov.

While SolGov’s power is vast, there are two notable exceptions to the body's sphere of influence within the Sol System. The large swathes of the planet Mars (Sol 4) - the historical headquarters of Nanotrasen - is typically policed by Nanotrasen, who are quite capable of policing and enforcing SolGov’s laws. As a whole, however, Mars is a vassal planet to SolGov and therefore under its purview.

The Second is the Earth’s moon (Sol 3.1), known locally as “The Moon” or “Luna.” The moon of Earth is protected under a special treaty granting it independence of Federation rule. The Port of Luna proper is administrated by Port Royal Inc. – an independent corporation which operates solely within the confines of Luna’s established boundaries.

Due to the nature of Luna’s economic zone of exclusivity, its status as a free port and its negligible taxes and fees, it has become an attractive haven for some of the wealthiest citizens in the galaxy to harbor their significant assets and holdings. Rumors abound that the CEO of Nanotrasen himself has a significant estate somewhere on Luna’s surface.

Based in the Sol system, the Trans-Solar Federation is a Citizen’s Republic, in that the line between civil administration and the military has become nonexistent. It has a bicameral legislature and separate judicial and executive branches. These branches form a series of checks and balances against one another, preventing any one branch of government from acquiring too much power. They are the Executive Branch, Judicial Branch, and the Legislative Branch, the latter being made up of the Citizen's Council and Civilian Assembly. It is a militaristic form of democracy, where full citizenship can only be gained through military service. The voting franchise is limited to full citizens, and they are the only ones allowed to hold public office. Additionally, after serving with a branch of the military, citizens gain access to Federation benefits, the right to purchase voting shares, and a share in United Trans-Solar, the state mining conglomerate.

Civilians are a class of Federation members who have not served and do not actively serve within any branch of its military at any point in time. They are entitled to basic rights, but cannot hold any form of public office, or vote for their representatives; save for the Civilian Assembly, the lesser legislative body meant to represent the civilian population of the Federation. The leader of this body is the Assembly Speaker. Civilians are sometimes permitted to vote in local elections under specific circumstance and law.

The Navy controls most major transportation of Federation soldiers, citizens, and cargo within their territory, and is led by the Fleet Admiral. The Marine Corps are the fist of the Federation, used against rebellious elements or in times of war or crisis, and are led by the Chief General. The Civil Defence Corps are the planet bound armies of the Federation led by the Field Marshal, and act defensively on Federation colonies and stations. Most members of the Civil Defence Corps serve on the same planets they have been recruited from, often fighting harder when defending what they consider their own homes. The services of the three branches are vital to the daily function of the Federation, but they and their leadership are not without reproach. The Navy, Marine Corps, and Civil Defence Corps are still answerable to the Executive branch of the Federal government, as well as the Citizen’s Council which reserves the right to censure and reprimand members of the military. The Citizen’s Council also possess the sole ability to issue a Declaration of War, as well as declare an Edict of Force; ordering the deployment of the Navy & Marine Corps to a specific end. Both of these actions must be passed with a majority and be approved by the First Citizen, as well as be signed by the President to become valid, unless such a declaration or edict is ruled by the Chief Justice to be contrary to the Federal Charter.

Despite its power, The Federation has had multiple rebellions and splinter groups. The latter, so long as they continue to pay taxes and keep to themselves, are generally ignored by the massive bureaucratic processes. Rebellions, on the other hand, are met with the government's full and undivided attention.

The largest, and most robust rebellion against The Federation occurred in 2443 when the Cygni system’s populace engaged in the wholesale slaughter of all federal personnel aboard Naval Station Oahu, resulting in an approximated 5,310 military casualties, 21 of those including high-ranking TSF officials. The Oahu Massacre, as it was later deemed, was quickly followed by a Declaration of Independence by the Cygni system governor, Malfoy Ames. Upon transmitting these declarations, he reformed the Cygni government into the Union of Soviet Socialist Planets. The Trans-Solar Federation considered this a declaration of war, which prompted the largest mobilization of human military might since World War III. An armada of 105 vessels arrived in the Cygni system, being met with the subverted Naval Station Oahu, 15 USSP-flagged converted TSF corvettes, and a massive squadron of about 150 converted civilian ships. Upon arrival at Cygni Prime, a declaration was put out by the SolGov Navy; The people of Cygni Prime would evacuate the planet immediately, or be killed in the ensuing nuclear bombardment. None of the rebel vessels stood down, the resulting battle lasted roughly 10 hours. After the fighting ended, a mere 20 Federation vessels remained functional, and all of the Union vessels had either fled or were destroyed. Millions of souls were temporary evacuated in the course of those three days, causing a minor refugee crisis in neighbouring systems within jump range of their civilian vessels as hostilities continued.

While the USSP was now busy rebuilding its military force with the help of its neighboring systems, the Trans-Solar Federation was not finished. A planetary assault was attempted by the TSF, yet its marines were severely outnumbered by the rebel forces and their ground-to-air defence system. Out of the five thousand deployed marines, 500 were captured and the rest either deserted or were killed. This was the first and the largest of Federation planetary landings against another human-centric government. Several other minor subsequent landings were attempted by the Federation forces, yet none of them were a success, something that many of the TSF's critics point to as a failure of its military and bureaucratic systems.

Onlya few days had passed since the start of the conflict as many protests against the war began to echo around in Sol. Military advisors of the Trans-Solar Federation advised against sending more Marines to die in the slaughter that was Nova Cygni, noting the lack of ressources for the war could backfire immensely. While the USSP had much, much more losses in both lives and ships than the TSF's powerful naval forces, the TSF buckled to many protestors' demands and decided to bargain for a ceasefire, which subsequently evolved into a long-term peace treaty. The Trans-Solar Federation would recognize the independence of the Union of Soviet Socialist Planets under the condition that all captured Federation marines, living or dead, were safely returned to the Federation. Many historians and journalists blamed the rapid response of the TSF as its biggest mistake, having spent too little time getting information on their oponnent before engaging while others point to the Human-Skrellian alliance, blaming the Skrell for their lack of support in suppressing the USSP's rebellion. In the end, the USSP won a pyrrhic victory against the TSF's powerful naval forces and was allowed to be left alone in relative peace, despite uneasy tensions.