Ash Walkers are the tribal natives of Lavaland. These Unathi-esque lizard people are fiercely protective of their land, and will more often than not kill any trespassers. Through the use of a Necropolis tendril, the Ash Walkers are able to quickly grow and hatch their eggs through the sacrifice of dead bodies. Their tribal origins make it difficult for them to use most forms of technology, limiting them to mostly crafted and scavenged weapons. Despite this, they're still quite dangerous, especially in large numbers.

Ash walkers differ in a few different ways to their Unathi cousins. The biggest difference being their inexperience with advanced technology. Most guns, machines, computers, and advanced tools are completely foreign to Ash Walkers and are therefore unusable by them. Because of this, Ash Walkers are restricted to the most basic of weapons and tech. Another difference is their digitigrade legs. Ash Walkers have a different leg structure compared to almost all other races, so they can't wear standard shoes or boots. This will restrict them to walking barefoot most of the time, which can prove hazardous with broken glass or cactus presenting a trip hazard without footwear. Ash Walkers can also only speak the Unathi language of Sintha’Unathi, making communication difficult without knowing the language or having a translator present. However, like their distant cousins, they are more vulnerable to brute damage, making them take 5% more compared to humans. 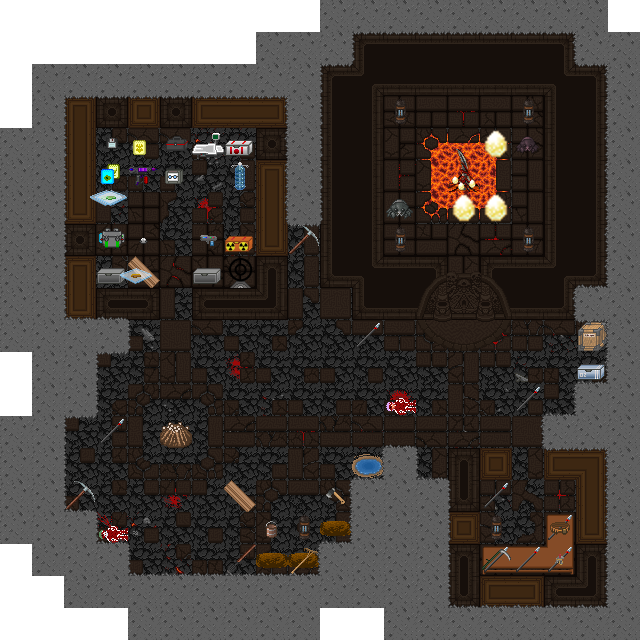 The Home of the Ashwalkers on Lavaland

Ash Walkers live for and die to protect their nest. It is their home in the hostile, ash filled landscape. Wandering in uninvited is an easy way for a miner to get swarmed and stabbed to death by the inhabitants, so it is recommended to leave if you aren't equipped to fight several angry lizard men.

Also present in the room are two Gutlunches. These scavenger creatures will eat any gibs, organs, and blood on the ground and produce milk, which can be drank for saline-glucose. If they eat enough, they'll give birth to a baby Gutlunch, which will grow into an adult once it's eaten enough.

On the North West side of the camp is the storage room. Here, all of the ill-gotten gains of the Ash Walker are kept. The room holds several useful, and some irreplaceable items, including a fully stocked toolbox, medkits, and simple medical supplies, an operating table, spare lanterns, a Rapid Construction Device, seeds and a seed extractor, a Gravitational Singularity generator, and an AI combat upgrade disk. (Those last two items, which have the potential to destroy the station, should ONLY be used maliciously with Admin permission. Always ask first.) A lot of the items in this room are either hard to get or impossible to replace, so make sure you don't lose them.

Outside of the buildings is an open area that has several dirt patches for gardening, a few garden tools, mining equipment, and a bonfire for cooking and ore refining. Do note that this area is exposed, so it will be hit by ash storms. Get inside one of the buildings before it comes. There'll also be some dead bodies around at round start, so drag those to the tendril to grow a new egg.

Inside the nest. There a few small creatures crawling around. They feed on the gibs produced by the egg-making process and produce useful chemicals that can be harvested with a bucket.

You have multiple seeds at your disposal to serve as food, health supplies, and building materials. All you need to do is dig the ground with a shovel, turn the ash into sandstone, and then turn the sandstone into a pile of dirt. You don't need to water or compost plants to keep them alive, they will already have max water and nutriment already. So after each harvest, simply use the shovel on the used dirt pile to remove it and make a new one in its place.

If you don't wish to do that, you can instead compost wheat into them for nutrition and use the bucket to water the plants from the nearby pond. Check the Guide to Hydroponics for more information.

In the storage room, you will find 5 seeds and a seed extractor. Other plants can be found out in Lavaland.

See the Flora Section in the Guide to Lavaland

You can craft a lot of useful things that will aid you. Most of them are made with the materials you get from hunting local fauna. All of these deal brute damage and brute damage only. On armors, not all protections are showed as they're not really useful. Accessories do not slow your movement.

There are creatures invading your sacred homeland and ripping out its innards for devious gains. You are not sure how to deal with these creatures just yet but you will find out soon enough when you encounter one.

Miners are often extremely hostile to you, you are allowed to kill them without quarter. However, you also have the option to trade and interact with them given the chance. Do not invade the mining base without serious provocation and you should always Ahelp before considering attacking the outpost or going on the station.

Be warned, miners are often better equipped and more robust than you are, so do not underestimate them. Hail Necropolis!